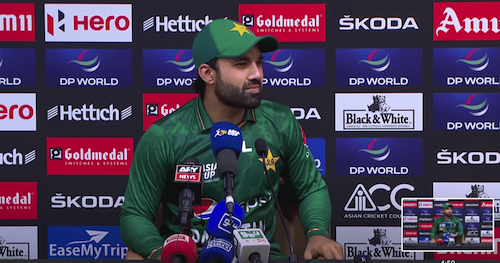 Asia Cup group matches came to an end with the last qualifier played between Pakistan and Hong Kong. Pakistan by playing the first scored a mammoth 193 runs by losing 2 wickets. Pakistan was playing very slow in the beginning as there were only 63 runs on the board with the loss of one wicket at the end of 10 overs.

Later on, Rizwan and Fakhar Zaman took to the command of the scoreboard in their hand, and ultimately there were able to put a big score of 193 runs. Rizwan scored 78 runs in 57 balls. Rizwan hit 5 fours and 1 six in his wonderful inning.

On the other hand, Hong Kong was just finished on 38 runs. It was a very disappointing end for the HK team in their last match of Asia Cup 2022.

After the match’s conclusion, a post-match conference was held in which Rizwan gave a press conference. In this press conference, he was able to give all the answers of press members wonderfully and confidently.

He was asked about the slow pitch and he told that the whole world knew in last year’s world cup that the pitches of Dubai and Sharjah are slow, if you put 55-60 in 6 overs, it’s a rare game.

He also answered about Smartcric India vs Pakistan again on next Sunday and for the Final too. He told that we should take Ind vs Pak game as a game of cricket.

He was also asked about the form of Naseem Shah and Shaheen, he mockingly told them let him play, it was just his second game, and in a witty way he told “me to kehta hu Nazar naa lag jaaye”

Watch out for the full press conference of Rizwan here.

For more such updates, check out our video section of Mobilecric.